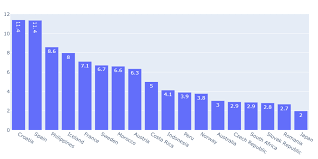 :COVID-19 pandemic. According to data presented by Stockapps.com, at the height of the lockdowns in Europe, Spain experienced a 97% decrease in reservations on popular accommodations sites; Airbnb, Expedia and Booking.com compared to 2019.

As countries shut their borders to protect their citizens front he pandemic global tourism virtually stopped. This was very apparent in Europe’s leading tourist destinations which were also one of the countries hardest hit by the pandemic. In week 15(March) of this year, when the pandemic began to take hold of the globe, Spain experienced a 97% decrease in bookings compared to 2019 numbers on popular sites such as Airbnb, Expedia and Booking.com. France meanwhile experienced a 99% decrease in the same time period.

Slight Rebound During The Summer But Still Below 2019 Levels

Even the traditionally high Summer period was not spared from the wrath of the virus. While the numbers did bounce back from the early days of the pandemic, numbers were still below 2019 levels as the world adjusted to a “new normal.” During the height of the summer period for most European tourist hotspots, Spain recorded only a 16% decrease in week 26 while France recorded only a 13% decrease in week 27.